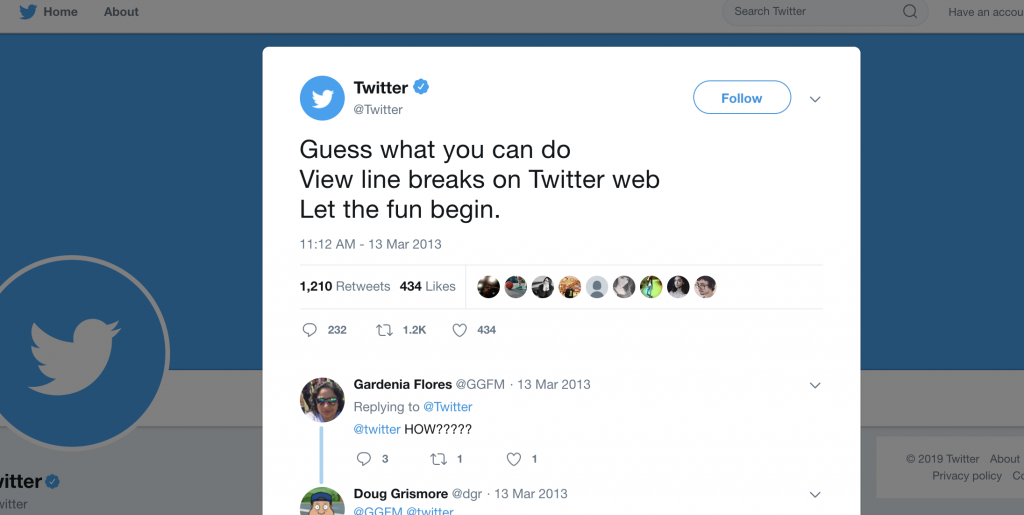 While it may not seem like a big deal as of now, it wasn’t that long ago that figuring out how to do a line break on Twitter was pretty difficult. This is a great guide to buy Twitter Followers, however remember the important of carefully crafting your posts and that is why Twitter line breaks are important.

Line breaks have been a part of Twitter now since 2013, and ever since then, people have been making the most of it.

While line breaks may seem simple, they happen to be one of the most useful Twitter tools out there when it comes to drafting and uploading engagement worthy tweets.

This is because they offer you the ability to make the most of the limited number of characters you have, and create space between them. Using a line break on Twitter is easier than you think, whether you’re doing it through your smartphone or your computer.

For the layman out there, a line blank is literally just a bit of space that separates two lines of text. The good news is that it’s also really easy to create one, too – all you have to do is tap the ‘enter’ key or the ‘return’ key twice when you’re typing up your tweet.

This can be done on your smartphone or your desktop.

Once you’ve put your text as you want it, simply click twice and keep writing what you want after the line break, and you’ve got yourself a nice space in between each line of text. Once it looks like how you want it, you can hit the ‘send Tweet’ button – and you’ll be able to see your line breaks.

When it comes to your Twitter bio, things are slightly more tricky.

While Twitter does make it easy for you to create a line break in your tweets, they won’t let you do the same for your bio.

All you have to do is use the symbols “ “ while you’re typing your bio. Symbols like this will create a space, and if you use them back to back enough times, the result will be a line break.

Just keep in mind, though, that they will be included in the character limit, though.

Don’t forget, you can call in the professionals if you need some help with your bio & Twitter followers.

While it’s not that common these days, there is a small chance that you may run into issues using line breaks in your tweets if you’re doing so from your iPhone.

This is because, in some cases, there is no ‘return’ button that you can click. However, you may be able to recover this button by finding the ‘123’ keyboard. When you do locate it again, you’ll be able to use it to create a line break.

Line breaks are one of the most underrated features of Twitter that are easy to take advantage of these days. Just remember, then, that there once was a time where you couldn’t create line breaks between your tweets.